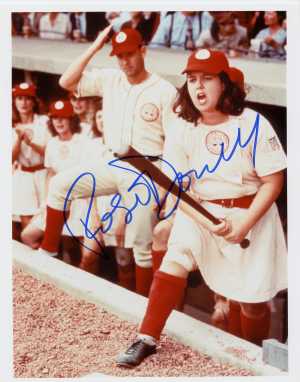 Last night after teaching the university students (very attentive) I sat down to eat dinner (homemade pizza and steamed veggies) in front of The Sopranos (on tape). But when I turned on the TV Bill Maher (bad hair) was on so of course I had to watch it (Real Time). They always put the "different" (minority) person in the middle on that show; the one time two African Americans (comedians) sat on the three-person panel, the white guy (author) went in the middle. Usually it's the other way around. This week the hot woman-in-red-leather was in the middle of two old white guys. But she held her own.

Afterwards I went to the kitchen to wash the dirty dishes. When I came back they were showing some documentary about a Rosie and Kelli* O'Donnell-hosted gay family Caribbean cruise. I'm generally a fan and defender of funny fat chicks. But with the exception of her performance in A League of Their Own, Ms. O'Donnell gives me gas, and I applauded The Simpsons when they put her on their Spaceship to the Sun. She's a punchline. But somehow I didn't push "play" fast enough and got drawn in.

While watching it I thought, "Hey, That Rosie is OK. She's got a smart mouth and I kind of like her politics. Besides, I used to wear big white t-shirts and pirate bandannas and a scowl like that, too." Then she started singing. Ouch. But for some reason I didn't turn it off.** Even after seeing the blatant product placement I left it on. They had people belting out show tunes complete with jazz hands. Still I didn't pull the plug.

The interviews with the gay parents who've adopted or had children were poignant. I thought, "Wow, they're so diverse." Then I realized all the parents, with the exception of former NFL player Esera Tuaolo -- whom I wish would adopt me -- were white. Although they seemed to be pretty good parents. The kids were the ones who were truly diverse...not that there's anything wrong with that.

Only later did I realize that the production was basically a 90-minute infomercial for Rosie and Kelly's new GLBT charter service.

*Who is that Gregg Kaminsky guy, anyway? He's in, like, every scene with Kelli and Rosie. The website says he's Kelli O'Donnell's "partner." Huh?

**There have also been times when I've purchased items on QVC (ugly mint green sweater), bought overpriced Time-Life CD box sets (The oxymoronic Best of the 1950's) and even changed phone companies, just because I was feeling mildly vulnerable.
Posted by Kali Om at 10:59 AM