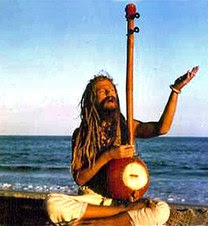 
I am on Day Five of teaching 18 classes and meeting three deadlines in a single week. So far I've not missed a single yoga practice.

I think this is a new record -- for me anyway.

It’ll be broken up by Friday’s kirtan with Bhagavan Das.

I’ve been reading his memoir, “It’s Here Now (Are You?)" AND watching the documentary “Ram Dass: Fierce Grace,” which has put me into total wHindu mode. Bhagavan Das went to India as a 20-year-old in 1964 and searched for awhile before finally finding his guru; Neem Karoli Baba. While in India he met Harvard prof and LSD wallah Richard Alpert, who imprinted on him and wanted him to be his teacher (actually Baba/Bhagavan Das says Alpert fell in love with him. and that it was quite annoying). Apparently it was Baba who kept telling Alpert to "be here now." In an attempt to shake him, Baba took Alpert to meet his guru -- who gave him the moniker Ram Dass (the guru had originally tried to give the name to Bhagavan Das -- who didn't like it and asked for something else. Why, if I’d known you could refuse a guru, I would have said hell no to Caca).

Ram Dass returned to the US and wrote about it all in his bestselling book "Be Here Now."

When Bhagavan Das returned from India awhile later, he learned he was famous because of the book. He started doing kirtans and hanging out with the likes of Allen Ginsberg and "Way of the Peaceful Warrior" author Dan Millman (apparently he was quite the boozer). But Bhagavan Das had a hard time handling his celebrity: The drugs. The women.

He eventually became a yuppie and alcoholic and Jesus freak -- not necessarily in that order. He returned to the wHindu trip in 1987, after darshan with Amma-the-hugging saint. This is all documented in his memoir. Baba also appears in "Ram Dass: Fierce Grace," which is about RD’s life and struggle to deal with a stroke (which he wrote a book about, called -- surprise! -- “Still Here”).

Krishna Das also appears in the movie. He too was part of the whole Maharaji trip (Krishna Das is sort of like the Leonard Cohen of the kirtan world; ie, deep voice + a minimum of schmaltz), although he lacks the long hair and beard. I recently learned that my favorite KD album, "Door of Faith," was produced by legendary hip hop svengali Rick Rubin. Beastie Boy Mike D. -- who practiced next to me in the old shala back in '02 -- produced Bhagavan Das’ terrific album, "Now." . And Bhagavan Das is quoted on Dharma Mittra's website: "Dharma is not just a yoga teacher, but a true yogi." You see -- it's all connected. We're all connected.

We should all be doing that, actually.


Das, by the way, means "follower of." Bhagavan, Ram and Krishna are (more or lesss) names for G-d. You already know what "caca" means.
Posted by Kali Om at 5:23 PM