On Friday I showed the documentary Ashtanga, NY to a friend. I had not seen it in years, but I wanted to get him interested in yoga. (I think it worked - and not just because I am in the vid for exactly .33 seconds. I think he was more impressed by Willen and Gwynneth and the woman who'd been in two car accidents).

The throat got tight and tears came when Guruji appeared in the video. He was 86 years-old at the time. Even though I was there, I'd forgotten how strong and vibrant he was. How commanding. That was my second workshop with him (read my articles about his 2000 workshop here, and 2001 here. Better yet, read my New York Diary, about Guruji and 9/11, here).

I was also taken by how incredibly sweet Sharath was. I'd forgotten that, too.

I was also struck by how cohesive the ashtanga scene was, even though it had already begun to splinter (and even though some of the NYC people could seem like aloof seniors to us ignorant underclassmen). Guruji was the glue holding it all together... the shining example for us to follow.

It was at that workshop, on 9/11 itself, that Guruji asked me when I was coming to Mysore.

Just a few months later, India and Pakistan were amassing troops on the border, and I was there in the old shala in Mysore, practicing next to Mike D and a couple of other people from the video.

But instead of nostalgia, I feel an intense gratitude. How lucky I was to be a part of it, no matter how small! 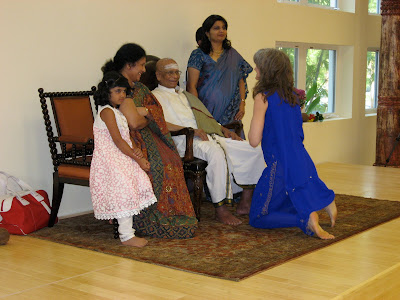