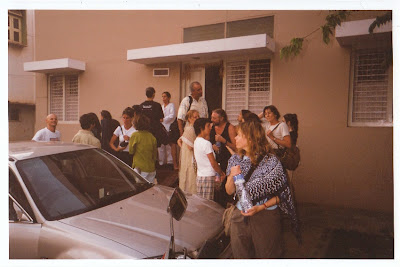 Joseph Dunham passed away last weekend, after suffering a heart attack in Cambodia.

He was the travel adviser and friend of Pattabhi Jois; after arriving in Mysore to study yoga for a month, he ended up staying for two decades. He was also quite close with Manju Jois - who expressed great sadness today about his passing.

I first met Joseph in NYC, during Pattabhi Jois's 2000 World Tour. He was so kind (and dashing). I also practiced near him in the old shala in 2002 and the new one in later years. He ways always friendly, helpful and welcoming - even to the novices. Especially the novices - who needed it the most. In recent years, he opened his home to ashtangis in Mysore.

(He's in the center/top of the photo above, which was snapped after a conference in the spring of 2002).


I meditate on Shiva
The three-eyed one
Of sweetest fragrance,
Helping me flower spiritually.
Like the fully-ripened fruit easily snapped
May I be free from the Bondage of Death.
May I not be without the nectar of immortality.