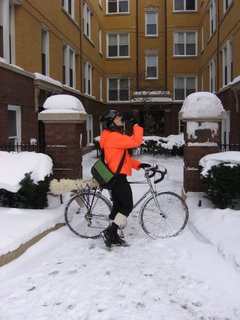 Since Thursday I've been in the new (used) car vortex, test driving, buying and then having fixed and fixed again and again a '92 Honda Civic that I purchased from a friend (duh) and which needs far more work than the mechanic originally thought (duh) but which only has 84K miles on it plus it came with a complete file of every bit of servicing it's had over its lifetime not to mention a dented hood (where a tree fell on it in New Hampshire) which means I don't have to worry about collision insurance. Plus I managed to sell my old car (91 Geo Prizm) to the auto shop owner, who will make his teenage son drive it this winter as some sort of punishment -- which brings to mind many questions but there's no time to ponder them at the moment as the thing is in shop no. 2 having the frame pulled and straightened (not unlike going to a car-o-practor) and undoing the damage that was done when my friend rearended a cabbie a year and a half ago. At some point I must find the time to go to Mechanic no. 3 to have the windshield re-sealed where T-Wan accidentally penetrated it with a shovel while clearing snow.... and then I may just find a cheap stereo to put in it. And a new antenna, so while stuck in traffic I can hear Amy Goodman and other college radio goodies.

In the meantime the house is a pigsty and I'm way, way, way behind on deadlines [it didn't help that I had to create an entirely new cartoon from scratch; the editor's afraid we'd be sued for the one I just did (see below) -- although *I* think we fly so far below the radar (and I draw so badly) that they'd never know] not to mention Xmas shopping and cards. This year's cards turned out well but I ran out of envelopes tonight and didn't pop out to get more because the car is in the shop and my only transpo is the bike which I normally don't mind but when it's 11PM and the windchill is subzero, well, one opts for bed, bath and blogging rather than the deep freeze of late fall -- even if one does have all the right layers and knows exactly where to wear them.

Tomorrow I'm supposed to take the train to the suburbs for shopping with Dorian Black, after which we'll pick up the car and I'll teach two evening classes. In fact I teach eight classes between now and Xmas. On Thursday I will teach FOUR classes -- a new record for me, if I make it -- including a noontime "vinyasa flow to live music," which I signed up for before I knew what was involved. If I must wear a mic I will die. Suffice to say I'm afraid. Very afraid.

*In Spain, Despedirse a la Francesa = to leave the French way (i.e.; without saying goodbye).
Posted by Kali Om at 1:04 AM