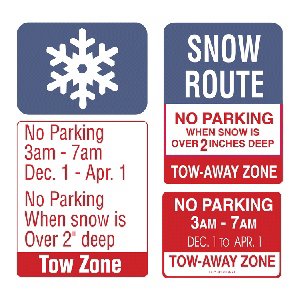 'SNOW JOKE:
I told you to stop snowing, er, smoking

We are in the midst of a major snowstorm, which normally wouldn't be a big deal except for that plane skidding off the runway into traffic and killing a child. Sad.

So is the city's punitive new 24/7 parking ban on major arteries, which goes into effect whenever there are two inches or more of snow on the ground. For those not in the know, FIVE HUNDRED MILES of streets fall under this ban -- basically it covers the entire city -- and of course I live on one of them.

So I moved my car to a safe spot (which I will have to shovel out tomorrow morning and then relinquish to my lazy neighbors, because I am not willing to mark it with a crappy old chair in the grand old Chicago tradition of calling "dibs" on my "spot"). Then I trudged my ass to class through the snowstorm.

The first thing I saw during my long winter's trek was a young male professional on a mountain bike, riding in the middle lane of my very busy street. He was dressed entirely in black, including the shorts he was wearing. No helmet of course. I saw him blow through a red light. In the dark. In several inches of snow, with more falling so hard it was going sideways. No wonder motorists hate people on bikes.

The second thing I saw was one of my favourite Windy City winter sights: A fat man with a moustache stepped out of his store and haughtily sprinkled a boatload of salt onto several inches of snow on the sidewalk in front. Why shovel, when you can salt?

Not one bus went by during my entire walk. And only one person showed up for class*.


Besides the snow ban the city has a new smoking ban that starts January 16 and goes into full effect in two-and-a-half years. It covers every indoor space except private homes and clubs, tobacco stores and a quarter of the city's hotel rooms.** Even folks caught smoking within 15 feet of a nonsmoking establishment can be fined a C-note, ouch.

But it's still more expensive to get ticketed and towed in the snow.

*This is a class which I am giving up as of tonight, because I'm paid by the head and I've tried for two-and-a-half years to get people to come and still no one does. The one student who came tonight was kind enough to give me a lift afterwards. Talk about going out with a bang.

**Which reminds me. Neck Tattoo, whose host likes to smoke in our lovely, carpeted stairway and stink up everyone else's apartment except his own, has reappeared. I saw him getting out of a car the other night, and he saw me too. I did not look away. He also got an eyeful of Dorian Black, who drives a big old pimpmobile and looks kind of imposing from afar.

I'm also somewhat flipped out about this bit of Mysore entrepreneurialism, which somehow it brings to mind the $3 chai from last spring's SKPJ workshop. If only I'd thought of it first.
Posted by Kali Om at 10:56 PM