SOLACE FROM THE GITA 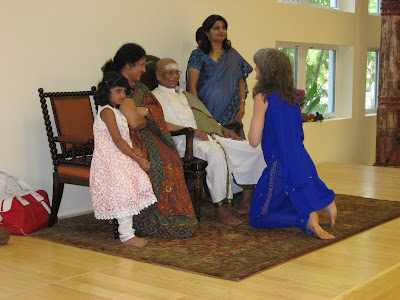 Exactly one year ago today, KT, TS, I and a couple hundred others were in the middle of attending three led primary series classes with Pattabhi Jois in Islamorada, Florida.

This week, we are mourning his death (although at the moment the feeling of gratitude for being able to study with him and say goodbye last summer is far outweighing any despondency).

This week, after a dream about Dharma Mittra, I began re-re-re-re-reading the Bhagavad-Gita and came across the following favorite passage from "The Way of Ultimate Reality," when Arjuna was upset about having to slay his family members in a just war. It's from Swami Nikhilananda's translation:


"The Lord said: You have been mourning for those who Should not be mourned for, though you speak Words of wisdom. Neither for the living nor for the dead do the wise grieve.

"Never was there a time when I did not exist, nor you, nor these kings of men. Never will there be a time hereafter when any of us shall cease to be.

"Even as the embodied Self passes, in this body, through the stages of childhood, youth and old age, so does It pass into another body. Calm souls are not bewildered by this.

"Notions of heat and cold, of pain and pleasure, arise, O son of Kunti, only from contact of the senses with their objects. They come and go; they are impermanent. Endure them, O Bharata.

"That calm man who remains unchanged in pain and pleasure, whom these cannot disturb, alone is able, O greatest of men, to attain immortality.

"The unreal never is. The Real never ceases to be. The conclusion about these two is truly perceived by the seers of Truth.

"That by which all this is pervaded know to be imperishable. None can cause the destruction of that which is immutable.

"Only the bodies, of which this eternal, imperishable, incomprehensible Self is the indweller, are said to have an end. Fight, therefore, O Bharata.

"It is never born, nor does It ever die, nor, having once been, does It again cease to be. Unborn, eternal, permament, and primeval, It is not slain when the body is slain.

"He who knows the Self to be indestructible, eternal, unborn, and immmutable -- how can that man, O son of Pritha, slay or cause another to slay?

"Weapons cut It not; fire burns It not; water wets It not; the wind does not wither It.

"This Self cannot be cut nor burnt nor wetted nor withered. Eternal, all-pervading, unchanging, immovable, the Self is the same for ever.

"The Self is said to be unmanifest, incomprehensible, and unchangeable. Therefore, knowing It to be so, you should not grieve.

"But if you think the Self repeatedly comes into being and dies, even then, O mighty one, you should not grieve for It.

"The Self, which dwells in all bodies, can never be slain, O Bharata. Wherefore you should not mourn for any creature." 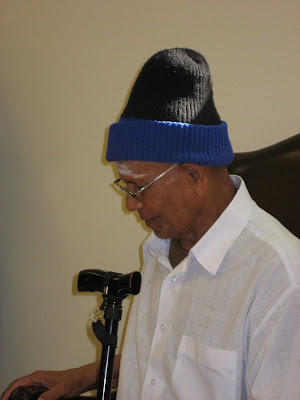