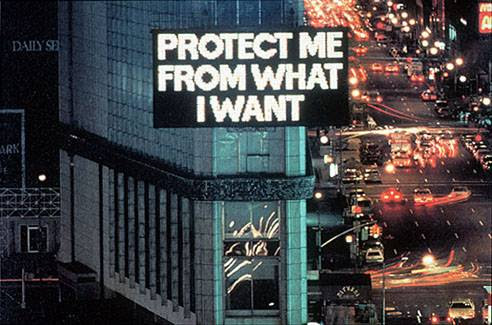 "Protect me from what I want."


In 1982, Holzer took an ad (the Public Art Fund paid) on a Times Square LED billboard. It read simply: "protect me from what I want." It was a cutting comment on modern consumerism in the age of "society of the spectacle" ((c) Guy Debord)

"Being Sure Of Yourself Means You’re A Fool"

"It's better to be a good person than a famous person."

"Ensure that your life stays in flux."

The main focus of jenny holzer has been on the investigation of means to disseminate her ideas within public space. since the late seventies, she has been working in the street and in public buildings, using media that would enable her work to blend in the landscape. from lcd displays (e.g., in Times Square, New York) to posters and stickers (applied to such urban elements as telephone booths or parking meters), the texts function as comments on that environment they fit into, stimulating awareness of our social conditioning as conveyed by the very landscape in which we may be confronted by them.
From this site.


Read more about Holzer - who was born in Ohio - here. 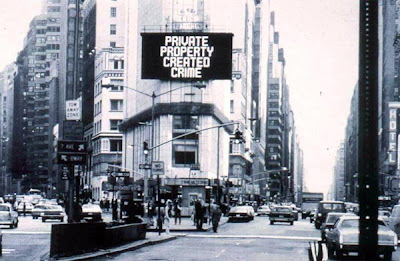