Whenever yoga students take their first trip Mysore they invariably make a pilgrimage to the old shala, which fit 12 students. This guy has many pictures of how it looks now -- ie; before Guruji, et al built a massive home/shala in the fancy part of town called Gokulam, where some 80 students practice at one time.

I'm too, uh, busy to scan more images at the moment -- in those halcyon days BG (Before Gokulam) we used analog cameras and teletype machines and purified our own drinking water -- but here's an idea of how things looked in the old shala circa 2002. 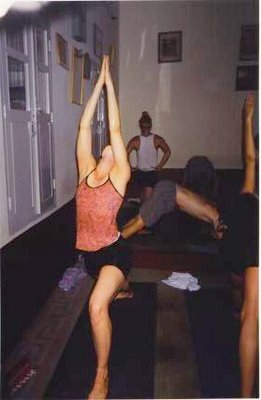 When Caca's stateside teacher saw this pic he said something to the effect of, "I can feel your s-i joint screaming in pain." He was right. In fact I can still hear it. Behind me (on the crease) is Randy-who-lives-in-Mysore and behind him is a friendly, fair-haired American called Dinesh. I'm not sure who's next to me but I think it's Madeleine-from-Australia. I still have that Prana top. 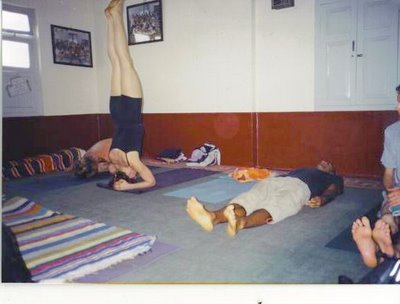 Who says your practice doesn't suffer in Mysore? Ms. Janice just sent this photo of me in an embarrassingly backbendy headstand in the famous upstairs closing room -- where I actually used to shuuush people who were talking. No wonder I didn't make many friends. This must have been early during my four-month stay (pat-pat), because it's already quite light outside. Corpsing out next to me is Tony, formerly of Holly and Tony's Mysore cantina. A bit of Bobeiseennow looks on from the right. The face of the person who seems to be suffering in child's pose next to me cannot be seen, so we'll have to assume it's Andre Van Lysbeth. The carpet has a swastika design on its border.
Posted by Kali Om at 11:26 PM