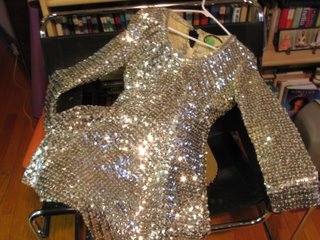 The other night I could not sleep. All night. In the midst of the tossing and turning and surfing, I grabbed the notebook beside the bed and wrote something I can barely make out:


The dress in question is the silver mini-dress, above, which I wore to our big 40 in '04 birthday celebration. I picked it up at a vintage clothing store when my mother was still (barely) alive, and immediately felt guilty. But she said to hold onto it - that I'd eventually find a use for it.

Eight years later I finally wore it for the first time. The party was fab -- there were many bands, wonderful food, several birthday celebrants, plentiful revelers, and one human disco ball -- me.

After the party my male friend at the time told me to change before we went to the 24-hour Mexican restaurant. I found this odd but complied.

One week later he broke up with me.

Then I learnt he was seeing one of the revelers. Not long after they became the proud parents of twins!

Once again Caca facilitates a marriage.


The dress was still on the hanger when I brought it to the thrift store today. I had to get rid of it before the year ended. When I set it down some staffers gathered around and said how glad they were to have it.