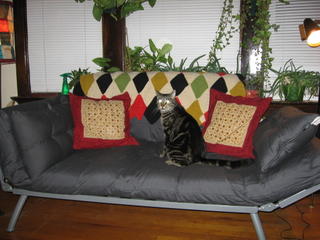 I have had no fewer than six sofas in my current apartment -- including the Weird Wood Loveseat Thing that Kirchoff Gave Me, the Maroon Futon that had been My First Real Bed, the Blue Fold-out Loveseat from Pier One, and the Pink Cloud. So why do I get so attached to furniture? Lately I've been searching and searching for a comfortable couch and finally settled on a charcoal gray "seating combo" that also serves as a twin bed. You know, so I can have house-guests again. I had the guy at Kmart strap it to the top of my car -- which took forever -- brought it home and dragged it to the storeroom.

But what to do with The Heaviest Sofabed in the World? I bought the vintage, mustard-colored vinyal hide-a-bed for $60 at the Brown Elephant in 1998. It has been in my possession the longest of any couch, and it took two Hurley burly men to bring it up to my third floor apartment. (No, I never used it as a bed! Gross! Although I did thoroughly disinfect it once I got it home). It was easy on the eyes but uncomfortable (why is it that form and function are so often mutually exclusive -- and not just when it comes to furniture?). The cushions had been squashed and shrunk to the point that they had the consistency of bricks. Boyfriends had always complained about it, since it was a couch built for one and suggested that I didn't need them in my life. In the sweaty summer whoever sat on it got stuck to it. On the other hand, you could wipe off anything you spilled on it.

My plan was to round up some big burly men -- harder to do these days, when they're all married with kids / have bad backs -- and put it in the alley and hope for the best. But then I talked to Jack, who is no longer AWOL. Since he is also Mr. Online, he talked me out of advertising it on the free stuff website and suggested that I put it on Craigslist. "I know you don't like people coming into your apartment, but you should do it." The reasoning was that if they paid for it, they'd care for it -- kind of like when you charge for kittens instead of just giving them away (they'd also be less creepy). Better yet, they'd pay me to take the thing away. Of course I was convinced that whoever contacted me thru the ad would be interested in one thing -- casing the joint so they could come back later and rip me off.

After much hemming, hawing and procrastinating I took some pix and created an ad: 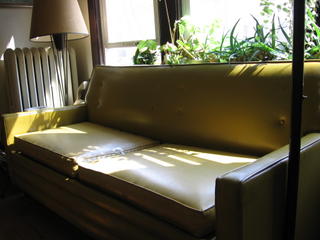 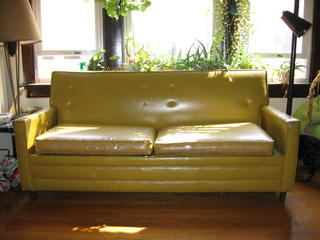 This cheerful, mustard-colored sofabed boasts a sleek profile and is 5.5 feet long. It pulls out into an (uncomfortable) bed. It's served me well as a primary couch but now it's time to move on. It's ideal for a small living room. Full disclosure: It's on the third floor and because it's well-made it's quite heavy.

The Hex calls it the most honest ad ever to appear on Craigslist.


Nonetheless, people started e-mailing me right away. So I raised the price to $50. Then I changed it to $40. And then back to $25 again. Some people wanted to set up a time to look at it. HUH? IT'S A $25 COUCH -- EITHER YOU WANT IT OR YOU DON'T. I was too creeped out to call any of them back at first, but then finally phoned couple of the women, whom I was sure were shills for Creepy Guys. I blocked my number with *67 so they couldn't track me down, break the door down and get me. At one point someone e-mailed saying, Would I take $20 and When could they come and look at it. I e-mailed back: How about we call it $22.50 and you come and get it right now. They didn't write back. Finally a young-sounding woman wanted to set up a time to pick it up: Noon on Saturday. OK, I said. But do you have someone to carry it? Yes, she said. It's heavy and you'll need two people, I reminded her. No problem, she said.

It's always good to have a deadline, so on Friday Jack and I put together the new couch (well, he did most of it). He's wearing a Utilikilt these days. With his desert boots. Afterwards we ate pizza and watched the first two episodes of Over There. We winced at each instance of Stupid Exposition, which means our facial muscles got a good workout. According to Jack (who spent a year In Country) they are using the wrong helicopters. Also, not everyone in the Army has nicknames (his was Captain Safety). There would be female soldiers at the checkpoints, to frisk the women in cars. And they would not spend so effing long in one place.

Next day I woke up with a migraine that more or less dissipated with sinus medication. I was nauseous yet unusually flexible during practice and only did primary series. After yoga I went into cleaning mode, wiping down the new couch, liberating all the cat toys and paper clips that had fallen between the cushions and clearing out the myriad dead leaves and other junk that had collected beneath it. Dust flew everywhere. Then I got going on the many plants in the window (see photo), removing all and sundry dead leaves and making an even bigger and dustier mess. I made myself sick in fact, and today I have the kind of sore throat where you feel like there's a hole punched in it. 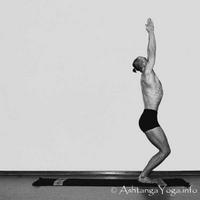 Not so good for telling well-heeled fancy health club students again and again to put their palms in prayer in Utkatasana. "Some of you should look at your thumbs and tell them again that they shouldn't be crossed." I think I even resorted to the old "I've been to India so you should listen to me" routine, which surprised me when it came out of my mouth and made me want to vomit.

By noon I had cleared a path and hidden all the valuables. By 12:15 the young couch-buyer had not shown and Surfer Girl was waiting for me at Jim's Grill. So of course I pictured myself keeping the old couch and getting rid of the new one. But the young lady eventually showed up in a purple van with a girlfriend and two skinny boys --one of whom she'd recruited that very morning, after he'd awakened at her apartment. She's furnished her entire pad via Craiglist, and nothing could possibly be heavier than the five theatre seats they picked up in Hyde Park.

We tied the thing shut with a phone cord so it wouldn't come open on the way downstairs. They got it into the rear balcony and stopped, untied it, and pulled out the mattress (which, it turns out, weighed A TON). It took the skinny boys forever but they finally got it down. No one was hurt. When the girl pressed $25 into my hand I felt like I'd won the lottery. But then I went back upstairs and looked at the new charcoal seating combo and felt very sad indeed. Almost everything I own is old, and this thing is new new new. It creates a dark area where there was once light. Worse yet, it lacks a soul....
Posted by Kali Om at 8:31 PM