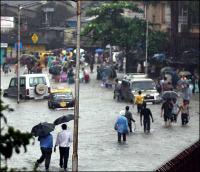 
So yes, while Bombay and New Orleans are both coastal cities perched on reclaimed land that received an insane deluge of rain, the latter experienced a full-blown Cat 5 hurricane with a storm surge chaser. I didn't quite understand the storm surge* part -- Was it a seiche?** Rain runoff coming up through the sewers? -- until yesterday, when I hit paydirt on NOAA's rather awesome website. It seems that a 20-odd foot wave with a bunch of smaller waves on top (kind of like frosting) hit the city and flooded Lake Ponchatrain and made the levees break. Apparently a surge is not so deadly when it nails a steep shoreline that's well above sea level. But when you build below sea level in a floodplain or marsh or wetlands or "reclaimed land," well ---....don't get me started.


This E-mail -- a rebuttal to yesterday's entry -- comes from Dreyfus and appears in its original (Dreyfusese) language:


No hurricane in Mumbai. 25+ foot storm surge in NOLA, washing over levees and sending a barge airborn to crash into another.

NOLA sits mostly below sea level. Mumbai sits 30-50 feet above sea level on average, with a high point of 1450 feet.

The problem in Mumbai was mudslides and flash floods, both of which are destructive, of course, but only in relatively limited areas. NOLA, OTOH, was almost entirely flooded, making nearly all the city uninhabitable.

One similarity, though - politics:

Mumbai, The BJP on Monday took to the streets in Mumbai to protest against the alleged failure of the government to effectively carry out relief and rehabilitation in the financial capital.

Senior BJP leader Gopinath Munde, said that they would step up their agitation against the State Government for not providing relief as hundreds of people still continued to live in relief camps with not a day's meal to feed on.

Munde said that the government should rebuild the damaged hutments in slum areas and raise them to a higher altitude to lessen the damage during rains, which every year cause flooding but not of this extent. Later on activists including Munde courted arrests.

"It has been over a month that flooding and rains caused havoc in Maharashtra but the state government on its part has done nothing for rehabilitating the displace and affected people. BJP with the support of over 50,000 people had taken out a rally protesting government' failure. This is just a start of our agitation against the government," said Munde.

The Mumbai floods killed over 1000 people and caused damaged worth several hundred crore of rupees.


BTW, a hundred crore of rupees is about US$23 mil. "Several" of those might reach one tenth of one percent of the damage from Katrina. And this to a city of 12 million that is the financial capital of India.


And the Indian death toll from the flood, including water-borne disease and whatnot (including a stampede caused by rumors of an impending dam break), is over 900 but is probably much higher since many poor people -- always the hardest hit -- are undocumented.


*Sergio Stormm would be a great name for a minor character in some opus -- or, better yet, a weatherman. His co-anchor could be Seiche Montgomery.