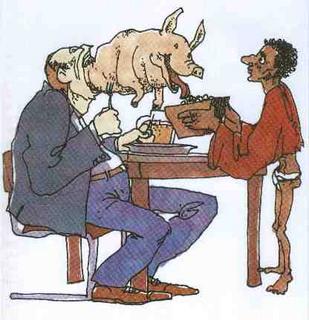 SATYA GETS ALL POLITICAL 'N' SHIT


People keep saying how surprised they are about what happened in New Orleans after Katrina hit. They cite all the poor people who were stranded, starving and shot at and say things like, “I can’t believe this could happen in America. It’s like we’re living in some other country.”

It makes me wonder where they’ve been over the past few years. Because anyone who’s been paying attention knows we’re actually A LOT like those other countries – only we’re fatter and have more stuff.

“Other countries” of course is code for the ones formally known as the third world –you know, developing nations -- where disasters kill thousands, governments are corrupt, elections are stolen, corporations run things, electricity is scarce and the leaders wear military garb. You know, countries that invade other ones for dubious reasons and then give their friends the contracts to rebuild the place.

We’re just better at hiding it than they are.

Does anyone else remember California’s rolling blackouts a few years ago – when people couldn’t get electricity? Well, they’re back again this year, and they’re going to get worse as gas gets scarcer.

What about the 1995 heat wave that killed over 700 people in Chicago? Pretty uncivilized.

Or take the time that Clear Channel Radio, which owns more American radio stations than any other company, instituted a nationwide ban on songs by the Dixie Chicks after singer Natalie Maines said she was ashamed that President Bush was from Texas and spoke out against his foreign policy -- even thought they were the country’s number one country act at the time. Then Bill Maher got fired. And then Bill Moyers got canned. And that’s just the tip of the free speech iceberg.

I was in New York when the Twin Towers were hit. Because I didn’t have any local ID, I was stuck for two days in the orange zone in lower Manhattan between Houston and 14th Street, where nothing was coming in -- no mail, no newspapers, no food – and no one was getting out. Checkpoints were everywhere. I actually wrote at the time that I felt like I was in one of those “other” countries. Now it doesn’t seem so strange.

In March of 2003, Chicago’s Finest targeted a peaceful anti-war march down Lake Shore Drive and arrested over 800 protesters, bystanders and office workers. The city went on to deny antiwar groups permits to march in 2004 and 2005.

And what about Chicago Mayor Richard Daley-the-younger bulldozing Meigs Field in the middle of the night because he couldn’t get rid of the lakefront airport through legal means? Sounds like the handiwork of a petty despot.

Which reminds me; it’s not just in other countries where sons pick up where their fathers left off. Does anyone else find it problematic that Mayor Daley and President Bush are both famous sons? And that their brothers all wield significant political power? Next thing you know, widows will start taking over for their dead husbands, a la Eva Perone.

Oh wait, that’s what happened in 2000, when Missouri governor Mel Carnahan died in a plane crash before beating John Ashcroft in the Senatorial election. Carnahan’s son, who was piloting the plane, died in the accident or I’m sure he’d be in power now. Instead Carnahan’s widow, Jean, was appointed to take his seat. (She lost the regular election in 2002 but her son, Russ, is now a member of Congress and her daughter, Robin, is Missouri’s Secretary of State).

In India, Bollywood actors get elected to office all the time. But at least they can act. In the US we get Ronald Reagan and Arnold Schwarzenegger.

Racism and segregation may be against the law but from what we’ve seen lately they’re still alive and well – and not just during hurricanes in New Orleans. Chicago is still terribly segregated. If you don’t believe me, go to Madison Street and wait for a Red Line subway train at rush hour. The people waiting on one side of the tracks will be predominantly black, while the other will be predominately white. Coincidence? I don’t think so.

Nor does New Orleans have corruption cornered. Former Illinois Governor George Ryan is in court on corruption chargers, and current Governor Rod Blagojevich is being investigated. I’ve lost track of all the investigations involving the mayor and his cronies.

Then there are the two most recent presidential elections and the dubious voter rolls in Florida in 2000 and Ohio in 2004. Maybe we should get it over with and just start sticking a single name on the ballot.

Now might be just the time to do it. It’s been said that Americans vacillate between complacency and panic, and right now we’re in the latter mode – which is exactly where we were when the Bush administration pushed the Patriot Act through Congress and got the go-ahead to invade Iraq – despite protests from the United Nations.

Now, while people are still outraged at the federal government’s failure in New Orleans, Bush wants to get rid of Posse Comitatus Act. The law was passed in 1878 in order to remove the military from domestic law enforcement. Specifically, the idea was to keep the military from “keeping social order” and upholding racist Jim Crow policies at polling places during Reconstruction. Which makes it seem like a good law to uphold – especially when you consider the past two elections and the fact that the National Guard already has the power to act as a police force (they’re the ones who opened fire and killed those four anti-war protesters at Kent State in 1970). But something tells me the Democrats will roll over and let Bush win this one, too.

Which is not to say that he wouldn’t look good in a flak jacket. In fact, it might go well with the denim jeans he likes to wear during those long vacations in Crawford.

As for me – I’m starting to think that all of those scary National Rifle Association people may be onto something when they talk about people having the right to bear arms in order to protect themselves from the government. I’m not there yet. Not by a longshot.

But I certainly am thinking about it.


cartoon is from here. Good luck reading it....