I've been fighting an awful cold for the past few days and it's been winning, which means the new couch is getting quite the workout. It may not be good-looking but it certainly is comfortable.

Maybe I could learn a thing or two from that couch...

I like say I have digital cable for when I get sick since I don't watch it that much and should probably get rid of it (monthly media column nonwithstanding). But when I'm sick I looooove the boob tube.

On Sunday night I caught a screening of Danny Schechter's new documentary WMD: Weapons of Mass Deception, in which he examines the US government's war on journalism during the current war in Iraq, and the media corps' collusion in cheerleading the invasion and giving credence to / spreading goverment lies. Suffice to say the so-called fourth estate is a tool of the man, man.

I neutralized with some Oprah (today she had the Dr. Phil of Finance telling people how to make a budget and teach their kids the value of the dollar already). Oprah shows a lot of shots of Chicago during the program and can I just say how cool it is that she hasn't relocated to LA / NYC like all the other ones eventually do. Love or hate her, she's got people reading again *and* she used her show to make a point in New Orleans. 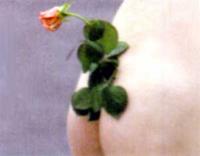 Apparently BBC America had some time to fill between screenings of Benny Hill. But why should they treat us to five seasons of Cold Feet, one of the best series ever produced (it's up there with 'Once and Again' and 'TV Funhouse' and 'Freaks and Geeks' and 'Rescue Me'). Perhaps one day....I did catch the Scottish serial 'Monarch of the Glen' (annoying) and 'Cash in the Attic,' which combines PBS's 'Antiques Road Show' with the TLC program 'Clean Sweep.' You know you're sick when it seems like a good idea to watch inbred Brits shed their dreck. But nothing makes one want to feel better, fast, like the Indian soaps on TV Asia and Zee TV.


NEWS AND SOME OLDS

-My SF chemist friend -- not exactly Sporty Spice* -- is featured in a new TV ad for the Oakland Raiders.

-The Hex appears in the new Franz Ferdinand video

-Yet another friend has separated from his spouse

-Neck Tattoo appears to have disappeared

-I'm to be an (old) Maid of Honor for the first time, in two weeks time

-The evacuees are poised to move into my neighbor's apartment *tomorrow*

-No payment yet, but the publisher has finally signed my book contract

-However the book editor does not respond to my e-mails


*He's straight but wore a skirt and makeup (no heels, just combat boots) when we were in college -- back before the Utilikilt people were even born.
Posted by Kali Om at 9:40 PM