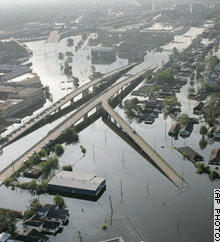 RIGHT IN OUR OWN BACKYARD

Our friend Munkin's sister fled New Orleans with her husband, who works at Tulane University, and two small children. Their house is next to one of the levees that broke, in a neighborhood called Lakeview. They've been living in Munkin's basement for several days.

But due to the graciousness of my neighbor and his new wife, they will soon be moving into a fairly-decent one-bedroom apartment that's just around the corner from Joan Cusack, and equidistant to a playground. They'll stay for the next few months; apparently Tulane plans to have a spring semester. During the walk-through - the two-year-old was enchanted with the staircase -- the husband mentioned that so many people have flooded Baton Rouge that the entire city is out of key blanks.

Afterwords we had lunch at the Southern/Cajun Wishbone restaurant (the two-year-old was craving red beans and rice and jambalaya). We all laughed as the husband regaled us with headlines from the latest edition of The Onion:

Government Relief Workers Mosey In To Help
FEMA representatives call out to survivors, "Show us your tits for emergency rations!"


Refugees Moved From Sewage-Contaminated Superdome To Hellhole Of Houston
HOUSTON—Evacuees from the overheated, filth-encrusted wreckage of the New Orleans Superdome were bussed to the humid, 110-degree August heat and polluted air of Houston last week, in a move that many are resisting.

Another Saints Season Ruined Before It Begins
NEW ORLEANS—Front-office executives of the New Orleans Saints football team provided a much-needed dose of normalcy Monday when they announced that, for the 23rd year running, the Saints season had been ruined before it began.

Bush Urges Victims To Gnaw On Bootstraps For Sustenance
WASHINGTON, DC—In an emergency White House address Sunday, President Bush urged all people dying from several days without food and water in New Orleans to "tap into the American entrepreneurial spirit" and gnaw on their own bootstraps for sustenance. "Government handouts are not the answer," Bush said.

It seems that women are doing some of the most thoughtful and incisive writing about the Disaster -- which only make sense when you consider that we must work twice as hard and be twice as smart as our male competitors. Apparently our headshots must also be twice as glamorous. 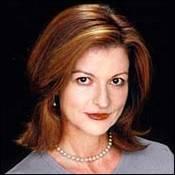 It took a while, but the president finally figured out a response to the destruction of New Orleans.

Later this week (no point rushing things) W. is dispatching Dick Cheney to the rancid lake that was a romantic city. The vice president has at long last lumbered back from a Wyoming vacation, and, reportedly, from shopping for a $2.9 million waterfront estate in St. Michael's, a retreat in the Chesapeake Bay where Rummy has a weekend home, where "Wedding Crashers" was filmed and where rich lobbyists hunt.

Maybe Mr. Cheney is going down to New Orleans to hunt looters. Or to make sure that Halliburton's lucrative contract to rebuild the city is watertight. Or maybe, since former Senator John Breaux of Louisiana described the shattered parish as "Baghdad under water," the vice president plans to take his pal Ahmad Chalabi along for a consultation on destroying minority rights.

The water that breached the New Orleans levees and left a million people homeless and jobless has also breached the White House defenses. Reality has come flooding in. Since 9/11, the Bush administration has been remarkably successful at blowing off "the reality-based community," as it derisively calls the press.

But now, when W., Mr. Cheney, Laura, Rummy, Gen. Richard Myers, Michael Chertoff and the rest of the gang tell us everything's under control, our cities are safe, stay the course - who believes them?

This time we can actually see the bodies.

As the water recedes, more and more decaying bodies will testify to the callous and stumblebum administration response to Katrina's rout of 90,000 square miles of the South.

The Bush administration bungled the Iraq occupation, arrogantly throwing away State Department occupation plans and C.I.A. insurgency warnings. But the human toll of those mistakes has not been as viscerally evident because the White House pulled a curtain over the bodies: the president has avoided the funerals of soldiers, and the Pentagon has censored the coffins of the dead coming home and never acknowledges the number of Iraqi civilians killed.

But this time, the bodies of those who might have been saved between Monday and Friday, when the president failed to rush the necessary resources to a disaster that his own general describes as "biblical," or even send in the 82nd Airborne, are floating up in front of our eyes.

New Orleans's literary lore and tourist lure was its fascination with the dead and undead, its lavish annual Halloween party, its famous above-ground cemeteries, its love of vampires and voodoo and zombies. But now that the city is decimated, reeking with unnecessary death and destruction, the restless spirits of New Orleans will haunt the White House.

The administration's foreign policy is entirely constructed around American self-love - the idea that the U.S. is superior, that we are the model everyone looks up to, that everyone in the world wants what we have.

But when people around the world look at Iraq, they don't see freedom. They see chaos and sectarian hatred. And when they look at New Orleans, they see glaring incompetence and racial injustice, where the rich white people were saved and the poor black people were left to die hideous deaths. They see some conservatives blaming the poor for not saving themselves. So much for W.'s "culture of life."

The president won re-election because he said that the war in Iraq and the Homeland Security Department would make us safer. Hogwash.

W.'s 2004 convention was staged like "The Magnificent Seven" with the Republicans' swaggering tough guys - from Rudy Giuliani to Arnold Schwarzenegger to John McCain - riding in to save an embattled town.

These were the steely-eyed gunslingers we needed to protect us, they said, not those sissified girlie-men Democrats. But now it turns out that W. can't save the town, not even from hurricane damage that everyone has been predicting for years, much less from unpredictable terrorists.

His campaigns presented the arc of his life story as that of a man who stumbled around until he was 40, then found himself and developed a laserlike focus.

But now that the people of New Orleans need an ark, we have to question the president's arc. He's stumbling in Iraq and he's stumbling on Katrina.

Let's play the blame game: the man who benefited more than anyone in history from safety nets set up by family did not bother to provide one for those who lost their families.