TWO TURNTABLES AND NO MICROPHONE 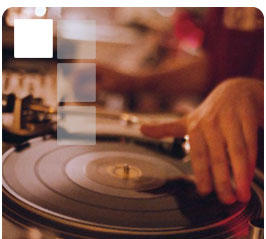 QUESTION OF THE HOLIDAY WEEKEND:

Why do people -- men -- bring mix CD's with uneven sound levels and dead air between songs to a party, and, upon arrival, make a beeline for the host, pull it from their pocket (it's never in a case or envelope), brandish it about and demand that it be played? Why do they then add insult to injury by hovering over the appointed DJ, who has provided and schlepped the sound system, and claiming, "I'm a deejay?" as if that somehow makes it OK? Because we all know they're deejays for one, at Club Mi Casa es Mi SUV. Of course there is exactly ONE GENRE of music on said CD -- usually songs no one has heard, or would want to hear again -- because why would anyone at an exquisitely set and well-appointed outdoor party crave variety? This has happened at so many parties -- and at so many of my own DJ gigs way-back-when -- that some brilliant young S & A grad student should do their dissertation on the topic. Fortunately the appointed DJ (not I) was diplomatic enough to allow some songs to be played (much to the delight of three people in the alley) and then segued to his foolproof 70's funk mix, which got the whole place moving -- even the sleek ladies whom Larry David Midwest dubbed "soap opera women."*


That said, it was somehow OK for me (DJ Spinsta Caca) to spring mine own painstakingly-crafted party mix (featuring even levels and mostly-exquisite segues) on Gridlife just hours before the fete, and harass him mercilessly with pleas that it be played....**

Now that that rant is finished....I just read a thoughtful and loaded piece about New Orleans' history of flooding and government largesse in today's NYT: 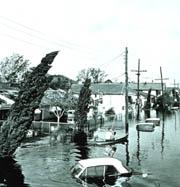 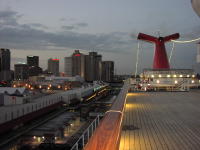 September 4, 2005
The Prologue, and Maybe the Coda
By JOHN M. BARRY

I CALLED my home in New Orleans Wednesday to listen to the phone ring. I didn't call for messages, knowing that without power the answering machine had not taken any. I called to connect to my home. No neighbors remained to talk to. The few who had remained through the storm and through the first part of the week had finally gone. Listening to the ring, imagining it echoing through the silent house, its sound waves caressing so much that I loved and so much of my life, I was reluctant to hang up. It seemed as if hanging up meant abandoning my home and my city, as if I were holding onto it, and hanging up meant letting it all ... go.

What we are seeing is well beyond the worst natural disaster in American history. We will never know the exact death toll, the direct monetary loss will easily exceed that of any other disaster, and the entire population of the New Orleans metropolitan area and much of the Gulf Coast will soon be scattered across much of the country.

We may also be seeing the virtual destruction of one of the world's great cities as well. In a way, though, that seems the least of the thing, and less important each day. The initial inability of local or national government to respond, our own impotence and rage over events, and the worst of it, the rapid descent into chaos - more like Baghdad or Mogadishu than an American city - each one of these things may be more disturbing than the heart-song of the loss.

How did it come to this, and where does it go?

Geology and economics answer part of the first question.

All the land in the Mississippi River's flood plain from Cape Girardeau, Mo., to the Gulf of Mexico - more land than Massachusetts, Connecticut, Rhode Island, New Hampshire and Vermont combined - was created by the deposit of sediment by the river.

New Orleans itself was located at a point particularly conducive to commerce, and the first areas settled were relatively high ground (and remain dry today). Levees, which go back to the Tigris and Euphrates, had long been in use to control floods, and also helped guarantee a shipping channel; until 1928 virtually all federal money for levees was justified by the river's role in interstate commerce.

This effort was, in effect, to channel the river, and it has largely succeeded. Levees have contained all floods on the lower Mississippi - which routinely carries triple the amount of water in the river at St. Louis - since 1927. Then canals and pipelines were cut through the marsh below New Orleans to make shipping and energy production more efficient. New Orleans benefited from all this, but not as much as Midwest agriculture exporters or steel importers, which enjoyed cheaper freight, or the entire nation, which enjoyed the oil and gas pumped out of the gulf.

But only south Louisiana has suffered from the trade-offs. No floods meant that the river no longer replenished the land each year with silt, so south Louisiana parishes began to sink. And the canals cutting through the marsh accelerated erosion. The result: the equivalent of the island of Manhattan disappears every 10 months. That explains the physical vulnerability of south Louisiana today. It does not answer the most disturbing question: How has New Orleans come so close to collapse? For what we are witnessing bears no resemblance to what has happened in the past.

Before this, the flood on the Mississippi River in 1927 was doubtless the most terrible American disaster. In one obvious way, it eerily foreshadowed today's. For one thing, New Orleans officials loudly warned that a disaster was waiting to happen, and condemned Washington for ignoring them, just as last week's devastation was widely predicted.

The scope of the 1927 devastation also resembled today's. No one knows the death toll. The official government figures said 500, but one disaster expert said more than 1,000 in Mississippi alone. The homes of roughly one million people, nearly 1 percent of the entire population of the country, were flooded. The Red Cross fed 667,000 people for months, some for a year; 325,000 lived in tents, some sharing an eight-foot-wide levee crown with cattle, hogs and mules, with the river on one side and the flood on the other.

Even amid that horror, as in other natural disasters, people responded by bonding together. Goodness emerged. The fault lines of race and class melted away with the levees, and the commonality of the burden that victims shared created a sense of common humanity. But as days dragged into weeks, honor and money collided, white and black collided, regional and national power structures collided. The collisions cracked open the fault lines and caused America to stagger and shift as well.

As a result, Americans rethought the responsibility the federal government had toward individual citizens. The government had felt little such responsibility. In 1905, a yellow fever epidemic struck New Orleans. Scientists knew how to fight yellow fever, and the Army had completely eliminated the disease from Havana. Yet, before the Public Health Service would come to New Orleans to save the lives of Americans, the city had to raise $250,000, in advance, to cover the expenses. Americans accepted this.

But in 1927, even after the expansion of government during the Progressive Era and World War I, not a single federal dollar went to feed, clothe or shelter any of the 667,000 being fed by the Red Cross. (Indeed, the Army even demanded reimbursement from the Red Cross for use of its field kitchens and tents.) Americans did not accept this. Overwhelmingly they expressed a new belief that the government should help the flood victims and, by implication, other individuals in distress through no fault of their own. This represented an enormous shift in public attitudes.

The flood left other legacies almost as significant. It sent hundreds of thousands of blacks out of the flooded territory to Chicago, Detroit and Los Angeles. Enormous positive publicity created the presidential candidacy and guaranteed the election of Secretary of Commerce Herbert Hoover, who had been in charge of the rescue effort.

Yet his subsequent betrayal of the national African-American leadership and African-American refugees snapped the emotional bond black voters felt for the G.O.P., the party that freed the slaves, beginning the shift to the Democratic Party.

The flood also left a legacy directly relevant to today. It led to the passage of the 1928 Flood Control Act, which was the most expensive bill Congress had ever passed, exceeded only by the cost of the Civil War and World War I. That same bill set a precedent redefining the relationship between the federal and state governments, and for the first time gave the federal government full responsibility for flood control along the lower Mississippi and many tributaries.Today we face a disaster even greater than the one in 1927, and for all the similarities a single difference between now and not only 1927 but the other natural disasters is most striking.

That sense of common humanity, of a shared burden, did not dominate the immediate aftermath of Katrina. Why not?

It is understandable that when no market or restaurant is open to sell food and water, people break into them to survive. As things escalate, some people go the next step and become looters. Once order begins to break down it is difficult to redraw the line. But how to comprehend the hell, the breakdown of society, the snipers shooting at hospitals, shooting at helicopters trying to evacuate people?

Yet perhaps this explains it: This disaster was not a common burden.

Many people who stayed in New Orleans chose to. But many, and probably most, of those who remained either paid too little attention to the warnings or would have gotten out if they could.

Once the levee gave way things deteriorated instantly. Communications between rescue personnel, between government officials became almost impossible. Things soon became so bad a senior aide to the mayor broke into an Office Depot to commandeer communication and computer equipment to rebuild a command post when water knocked out the original one.

The population, without power, had no information from television or radio.

Troops are finally taking control of what may never again be called the Big Easy. Midwest farm exports still need cheap freight to compete in the world market, and the nation still needs the oil and gas from the gulf; moving that infrastructure and building new refineries would cost billions and take years. If - a major if - the existing plan to reverse the coastal erosion will work, then it and the cost of protecting the city against hurricanes may well pass even a cost-benefit test.

But past the question of rebuilding this city, my home, will this disaster leave an imprint like the 1927 flood? Will it cause the world to change the way it engages the environment? Will it cause Americans to think about the role of government and this newly seething underclass?

I don't know. On Thursday, I tried to call my house once again, to listen to the phone ring. I could not. The phone no longer works.

John M. Barry of the Center for Bioenvironmental Research at Tulane and Xavier Universities is the author of"Rising Tide," about the 1927 Mississippi flood, and"The Great Influenza."