-Posted using BlogPress from my iPhone

DHARMA VS ENTERTAINMENT
a.k.a. yoga vs. bhoga


I attended Aadil Palkhivala's class on hip openers at the Yoga Journal Conference. Dharma wasn't teaching at that time, and I thought, "Why not?" I know several yoga teachers with pain in the right hip - it couldn't possibly have anything to do with decades of doing padmasana with the right foot first - and thought perhaps it could help them.... us.

After leading us through the Gayatri Mantra, Aadil began a discourse on the importance of Dharma, or figuring out and achieving your life's purpose. He went so far as to state that "The purpose of life is Dharma." Of course I loved all the talk about Dharma (for me Dharma is the guru, and the goal - once one cleans up their act - is self-realization).

Aadil said that entertainment is the opposite of Dharma. He explained that he has stayed in many, many hotel rooms over the years - and that each one of those hotel rooms had a TV in it. He said he'd never turned on a single one of those TVs.

And I thought of how I'd watched a few minutes of "Roseanne" during a bout of insomnia the night before. Oops!

As Sri Dharma Mittra said at the same conference, "You can stare for three hours at the TV, but you can't find ten minutes for meditation? You must be self-disciplined. You are your own worst enemy when you are not self-disciplined."

During sadhana, it can be helpful to occasionally give a treat to the senses.

This may include going to the local Indian language cinema to see the latest police-vs.-mafia action film, Singham.

It was like going to India, minus the 22-hour plane trip and other hassles.

The film was up there with Dabaang, and way better than Khakee (which featured this film's hero, Ajay Devgn, as the bad guy).

It was entertainment and it was about Dharma - doing one's duty even though it seems impossible, and restoring order to a corrupt world.

Four stars (it would have been 4.5, but for its portrayal of Kannadigas and the clunker song in the second act).

The senses were well-pleased, and are now leaving the mind in peace.

And on the way home I bought a watermelon off the back of a truck....


One more view on Dharma:

Swami Radha said, "If there is a conflict between the life that you are living and the one you should be living, your inner conflict will grow and grow and grow. Then the Divine will say, 'That's enough now. I have given you a lot of rope. You have tried all things that everybody else is doing. That's finished now.' And then something dramatic or painful may come into your life to make you change."
Posted by Kali Om at 6:43 PM 4 comments:

Chicago is in the throes of an oppressive, week-long heat wave that's headed towards the East Coast.

Here are some ways to cope:

-Drink regular water - and lots of it

-Eat mostly live foods, which are less filling and require less energy to digest. Watermelon is wonderful - especially with fresh lemon juice squeezed on top. Just make sure you eat it alone and on an empty stomach (otherwise it'll be difficult to digest.... and turn into fat)

-If your mind becomes dull in the heat, sprinkle cayenne pepper on food or in the hot lemon water you drink first thing in the morning

-Speak less. Talking wastes valuable energy - especially when speaking of useless things. (Plus, you're less likely to get into an argument).

-Do less. Cancel plans. Stop running around. Conserve energy. Copy the behavior of your pets - who know not to do too much in the heat.

-Check on elderly neighbors and makes sure they are comfortable.

-Watch a blockbuster movie in AC comfort. Bring the neighbors.

-Jump in the lake

FOR ASHTANGIS ONLY:
Do 3 Surya Namaskar B instead of 5....and don't skimp on backbends, inversions or the resting pose.

Today is Guru Purnima, the day to honor the guru (it also would have been Sri K. Pattabhi Jois's 96th birthday).

In other words, this is the time to revere the guru or teacher, and to recommit to one's spiritual practice.

(For example, an irresolute asthanga student could commit to coming to class three times a week rather than two. Someone with a sitting practice could commit to sitting twice a day rather than once a day, or to increase their pranayama by one round each day, or do a certain number of japa each day, etc. Of course my interpretation could be turning this into Lent, which is something else altogether).

I suggested Wednesday that ashtanga students consider refraining from eating garlic and onions.

This was met with loud protests.

Dharma said last weekend, in reference to something other than Guru Purnima, that in the olden days yogis would give up sugar and salt for a month in order to increase their willpower.

That idea appeals to me.

But one suspects that that wouldn't go over so well, either.

So many of us are conditioned to expect the benefits, without doing the tapas.

A quick, massive thunderstorm storm ripped through the Chicago area this morning. I was practicing yoga downtown after teaching a Mysore class, and didn't notice just how violent it was.

Apparently the microburst included something called a derecho -- a short, violent windstorm with sustained straight line winds that can exceed 100 mph.

When I got home, I saw a fallen tree completely blocking the road. 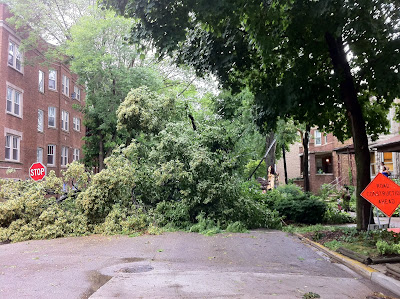 Neighbors were milling about, pointing and talking about the parked car it had crushed. 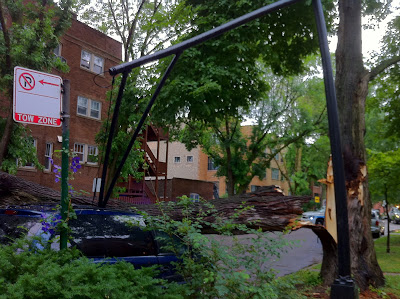 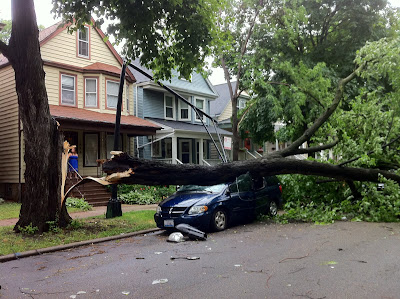 (One of the positive side effects of minor natural disasters and fires is that they bring people together; there hasn't been this much unity and talking-to-strangers on the street since February's record-breaking blizzard). 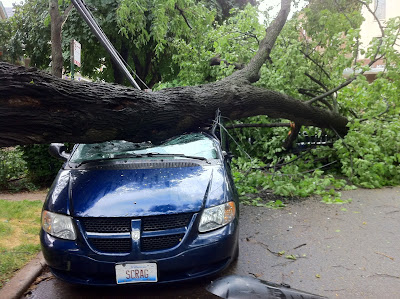 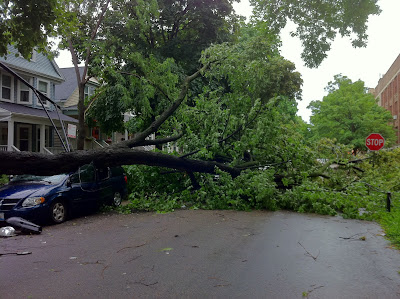 Turns out there wasn't just one car crushed by the tree; a closer inspection revealed a second one hidden underneath. 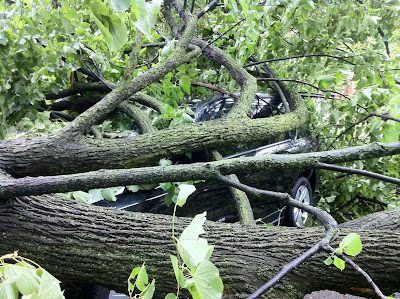 You could just make out the SUV grill peeking through the leaves. 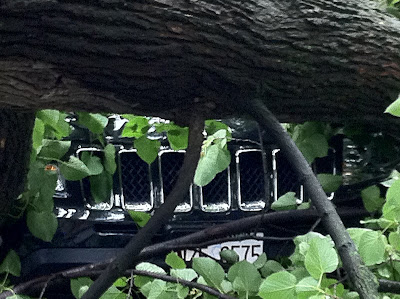 Apparently the driver was passing by at the exact moment the tree fell.

He was OK, according to the neighbors.

But the tree was not. 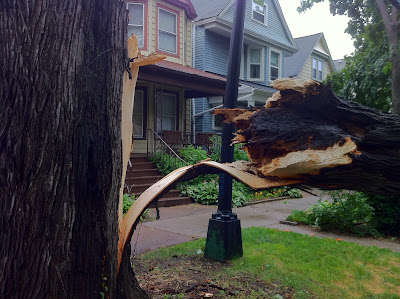 It made me sad, since I am convinced that trees (even ones condemned by the city last year) feel pain.

So I patted it and did a few Tryambakams for it. 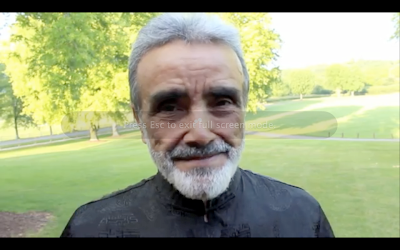 Later, I saw Dharma signing his Asanas: 608 Poses book - while in a forearm stand.

Sadly it ended before the camera came out of the bag.... 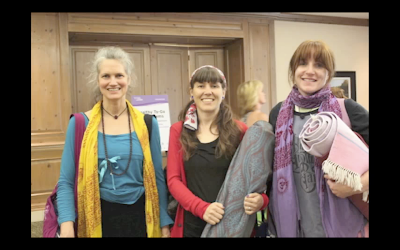 Dharma has been imparting the highest spiritual knowledge with compassion, humility and humor.


120 animals at the Animal Welfare League's intake facility at 62nd and S. Wabash are in danger of dying after thieves stole two of the building's air conditioner unit and vandalized two others.

Their already difficult lives have become even more hellish.

One cannot help but imagine these poor animals gasping for breath as they cling to life.

I was driving on Lake Shore Drive during Thursday night's terrifying hailstorm and 94-mph winds, and thought that the windshield was going to burst as it was bombarded by golfball-size hailstones.

The windshield held, but the greenhouses at the Garfield Park Conservatory didn't fare so well. Many were shattered (see photos here), and the fragile eco-systems that are so carefully cultivated are now in danger of going to pot.

I imagine all of those battered plants gasping for breath as they cling to life.

There was so much damage that it's been closed until further notice.

The GPC is one of the city's treasures, designed by the great landscape architect Jens Jensen over a century ago. Maybelline and I made a brief visit there near the end of winter - you can see some pix from our trip below - and they could use our help.

The Garfield Park Conservatory sustained catastrophic damage in last night’s hailstorm, shattering approximately half of the glass panes in the roofs of the historic Fern Room, Show House, and nine propagation greenhouses. The glass panes in the Desert House also sustained significant damage. The pathways, ponds and plants in the Fern Room, Show House, Desert House and propagation houses are covered with broken glass, and shards of glass hang dangerously from the roofs. Until the roofs are repaired, rain will cause the ponds to overflow, and direct sunlight will destroy and kill the plants that have been so carefully and lovingly conserved for so many years. We are facing an unprecedented clean-up and repair of our display houses. We need your help like never before.

"I stuck my head in this morning, thinking I might go in and check on them, when a huge piece of glass came crashing down," said nursery worker Terri Reardon, holding back tears. "I don't have children on purpose. The plants are like my babies."

Learn more about the damage here and here.


Pix from our post-yoga excursion earlier this year..... 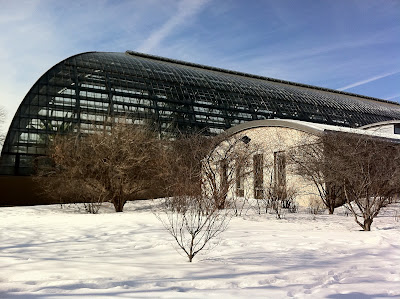 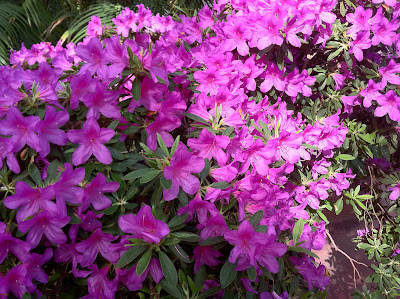 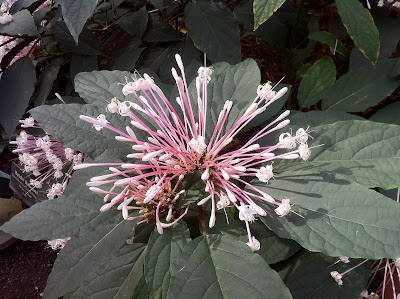 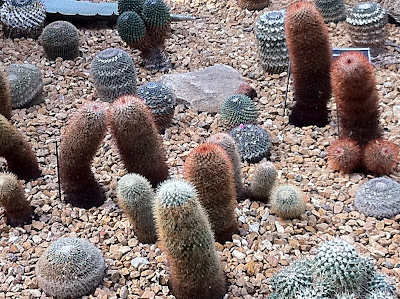 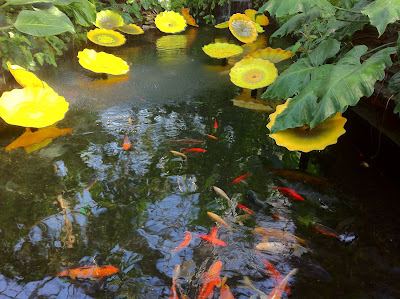 The focus will be on deepening one's spiritual journey and becoming a yogi. 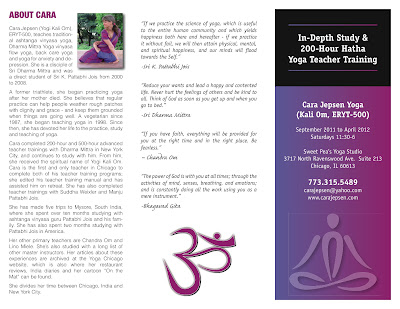 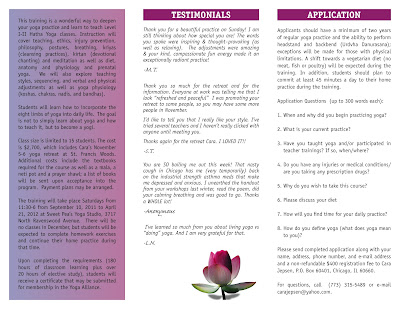 
Brochure designed my Tim Jepsen.
Posted by Kali Om at 7:21 AM 2 comments:

Over the Jewel parking lot near Thybony....