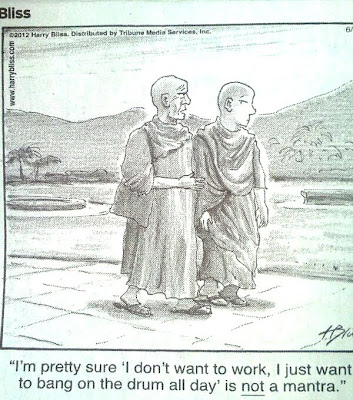 "The thirst for objects can never be quenched by their enjoyment."

Brahma Murari composed by Adi Shankaracharya
Posted by Kali Om at 4:00 AM No comments: 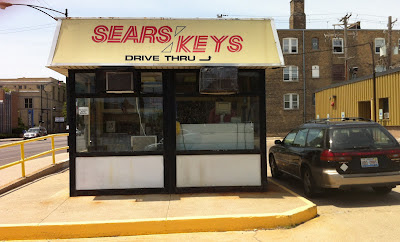 This little gem is located at the Sears store on Lawrence Avenue. You can really drive up and have a key made. Not only that, but the gentleman inside knows keys inside and out (and easily copied the bent and torn mail key that the lady at the hardware store refused to touch).
Posted by Kali Om at 11:15 AM 3 comments:

If you want to enter Samadhi quickly, cut off all connections with friends, relatives, etc. Do not write letters to anybody. Observe Akhanda Mouna or the vow of continued silence for one month. Live alone. Walk alone. Take very little but nutritious food; live on milk alone if you can afford. Plunge in deep meditation. Dive deep. Have constant practice. You will be immersed in Samadhi. Be cautious. Use your common sense. Do not make violent struggle with the mind. Relax. Allow the divine thoughts to flow gently in the mind.

We all know Marichyasana A,B,C & D from the Ashtanga Primary Series. But have you met the reclusive side of the family - Mari E, F, G and H?

(BTW we did Marichyasana E and F in my Sunday 10am class; although these poses reside in the Advanced B series, they're much easier [and less precious] than they appear in this video. On a roll, we also did Akarna Dhanurasana A).
Posted by Kali Om at 4:00 AM 1 comment: 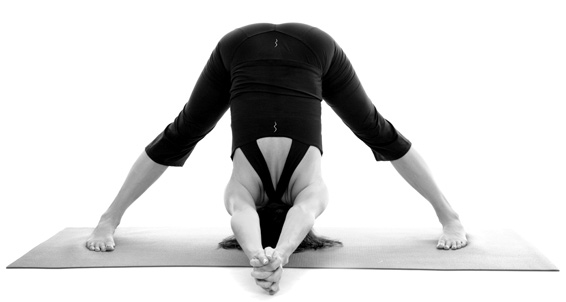 ,
After 15 years of five-to-six days-a-week practice, the ashtanga system continues to yield great awards - and to amaze.
,
NYC-based teacher Greg Tebb was in town last week assisting Manju Jois at his workshop and teacher training. Greg also did the morning Mysores this week.
,
I did not get to practice with Manju due to time conflicts and an elbow flareup.
,
But I did get to do two asthanga self-practices with Greg. He has compassionate, nurturing-but-not-weak teaching style that is grounded in steady practice, teaching and study over a long period of time.
,
He kindly pointed out some bad habits that have evolved over many months of self-practice, and I immediately began to work on them. He also had some helpful suggestions regarding the tennis elbow and neck issue.
,

It was fun (if that is the correct word) to have the help to drop into Karandavasana (above) and do dropbacks for the first time in...in... who knows how long it's been.
,
During Prasarita Padottanasana C (photo at top) he had me tuck my head in (as Lino does) and it seemed to take very little for him to get my fingers to the floor. (I'd been under the impression that the hands were a foot from the floor due to tight shoulders / thoracic spine, and that the pose would never happen without help).
,
So I tried it today on my own; it is, after all 90 degrees and humid.
,
So I went into Prasarita C. and put the arms forward as far as they would go. Then I tucked in the head and extended the little fingers downward.
,
Voila! Fingers touched something hard: the floor.
,
Without help.
,
For the first. time. ever.
,
In fifteen years.
,
The seemingly impossible, suddenly within reach.*
,
Who knew?
,
It's just like the Yoga Sutras say:
,
1.14. sah tu dirgha kala nairantaira satkara asevitah dridha bhumih
This practice becomes well-grounded when continued with reverent devotion and without interruption over a long period of time.
,
The good news is that the sutras are actually referring to control of the mind.
,
The postures are just a tool....
,
And a good one at that, to show us what is possible.
,
But the mind control is where it's really at - where the real challenge lies.
, 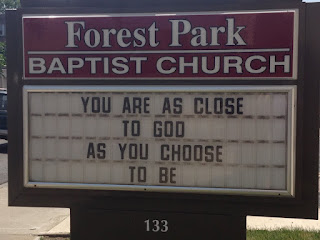 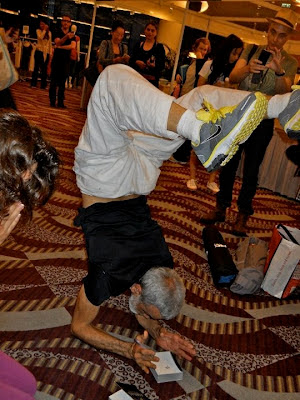 photo of Sri Dharma signing his Asanas book taken this week during his Asian tour
Posted by Kali Om at 9:09 AM 2 comments: 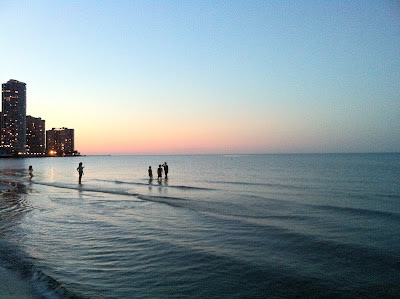 snapped last night
Posted by Kali Om at 11:25 AM No comments:

"Do your sacrifice now. Later, you can enjoy [the outside]. Like when becoming a doctor, you have to study and sacrifice like hell. Then you don't have to go to school anymore, once you have your diploma. If you sacrifice a little bit more from outside, you get more from [the spiritual heart]."