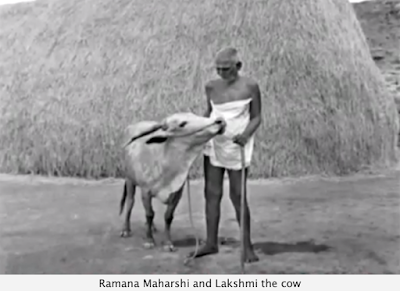 "That even ‘lower’ life forms such as birds and beasts can attain the supreme state through the grace of the great ones [mahapurushas] was explicitly demonstrated by Bhagavan through the following incident. Bhagavan [Ramana Maharshi], ever shedding grace by remaining in the meditative state of Self-abidance, once externalised his attention, turned towards his devotees with a smile, and suddenly asked the following question.

"‘Do you know what state Lakshmi is in now?’

"Having never witnessed such a scene before, the devotees were puzzled by this unusual question. There was a cow standing in front of him with a motionless and ﬁxed expression on her face.

"The ever-cheerful Bhagavan said, to the astonishment of the devotees, ‘She is in nirvikalpa samadhi,’ revealing by this brief comment the extraordinary power of his grace.

"The cow, affectionately called Lakshmi, was closely associated with the ashram. When she came, as usual, for Bhagavan’s darshan and stood in his presence, Bhagavan looked at her with great affection and started stroking her head. As a consequence of receiving this hasta diksha [initiation in which the Guru places his hands on the disciple’s head] she experienced immediately the state nirvikalpa samadhi.

"Although it is common to come across many human beings with bestial natures, it is extremely rare to see an animal with human nature.

"Bhagavan himself once pointed out the sanctity of Lakshmi by saying, ‘We don’t know what austerities she has performed in her previous births. It may be that she is in our midst only to complete her unﬁnished tapas!’

"After her nirvana, her body was entombed within the ashram premises in the presence of Bhagavan. It was done in the traditional manner, and a memorial was built on top. Among all those who took refuge in Bhagavan, only Lakshmi had the good fortune of having an epitaph written by Bhagavan himself conﬁrming her liberation. This is what Bhagavan wrote on that occasion: ‘Lakshmi the cow was liberated under the star of visaka on Friday, the twelfth day of the bright half jyesta in the year sarvadhari [18th June 1948].’

"Among the fortunate animals that were the recipients of Bhagavan’s grace, there were others such as dogs, peacocks, squirrels and crows. Indeed, the life history of each one of them is wonderful. When it is seen that even animals attained mental quiescence by the extraordinary power of Bhagavan’s presence, will it not be superﬂuous to say that human beings attained the same? During the half century of his manifestation as grace divine at Arunachala, innumerable were the instances and inﬁnite were the ways in which Bhagavan showered his grace on all those who approached him." 🕉


from Timeless in Time, by A.R. Natarajan
Posted by Kali Om at 4:00 AM