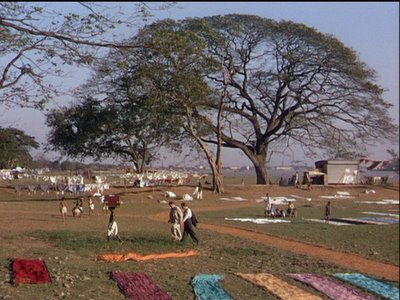 60 - Number of students taught on Sunday.

16 - Number of classes to be taught this week.

1 - Number of classes left to teach before watching The Shield.

11 - Number of minutes left to finish this entry.

5:31 PM CST - The moment when Satya looked up from locking her bike and saw a woman get out of a cab and run (not walk) into the annoying theme bar Blue Bayou.

1 - The number of masterful Jean Renoir films playing at the Music Box Theatre, which combine three of our favorite things -- Excellent writing, excellent filmmaking and lovely India. Renoir is the son of the famous painter and auteur of Rules of the Game, and The River is his other masterpiece. It's from a book by Rumer Godden (who also penned Black Narcissus) and was his first color film, made after he moved to Hollywood and done on a shoestring. Suffice to say it's so incredible that Martin Scorsese Himself watches it three or four times a year. (This brings to mind the time I watched The Hex shush Spike Lee not once but twice at a nearly-empty NYC screening of Raging Bull). Anyone who lives in Chicago should run (not walk) out and see The River before it closes on Thursday. Timings are here. It's in English, by the way, made in 1951 although it depicts events that take place just after WWII and just before Independence and the ensuing nightmare called Partition.

Some River trivia from IMDB:


When Kenneth McEldowney, a successful florist and real estate agent in Los Angeles, complained to his wife, an MGM publicist, about one of her studio's films, she dared him to do better. So he sold their home and floral shops, and from 1947 to 1951 worked to produce this film. It opened in New York to a record 34-week run at reserved-seat prices and was on several ten-best movie lists in 1951. McEldowney then returned to real estate and never made another movie. 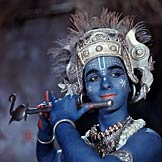