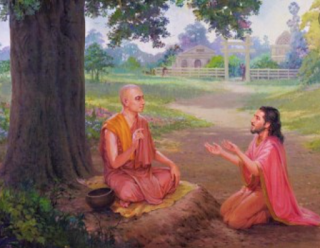 Maya
from Robert Adams' Silence of the Heart

One day Buddha and his chief disciple, Narada, were walking along a country road. Buddha was discussing maya. He explained that the tree, the river, the mountains, the beauty, all of the bugs and the mosquitoes, animals all were maya. And Narada said, "But Master, how can this be? It sounds virtually impossible. I can grab the tree. I can grab your arm. I am stung by a mosquito. I feel this thing, there is a bump on my arm. How can this all be illusion? I do not understand” And Buddha said, "I am thirsty. Go get me a glass of water.”

There was a town nearby, so Narada went to the town and knocked at the door of the first house he saw. An old lady opened the door. She said, "What do you want?” Narada said, "My Master would like a glass of water.” She looked him over and saw that he was handsome, well built, healthy, and she said, "Come in.” He went into her house and there was a beautiful lady sitting on a chair. The woman said, "This is my daughter. Isn’t she beautiful?” Narada was astounded at her beauty. He said "She is the most beautiful girl I have ever seen.” The old lady said, "How would you like to marry her?” And Narada said, “Why not?” So he married the girl. They had a big wedding, and all of the people in the village came. The next day, he got a job. He was a potter by trade, and he made beautiful pots out of clay. He did this for a living.

After the first year, they had a child, and he was able to afford a beautiful house. He had a mortgage payment, and had to pay taxes. So he had to work harder and hire people to help him. He had employees. He had to pay them salaries, take out taxes, workers compensation, and everything else. Then, after two years passed, another child. He was completely enmeshed in family life. Some days were good. Some days were bad.

A couple more years went by, three years, four years, five years. One day there was a big hurricane, a very powerful hurricane that came into town. The place was getting ﬂooded. Narada said, "What are we going to do?” All of his furniture was being ruined. Everything that he believed he owned was getting wet, totally ruined. He took his family up on to the roof. There was a clothes line on the roof. All hung onto the clothes line. The hurricane became stronger and stronger and stronger. His mother in law was washed away by the ﬂood. Narada said, "I guess we did not need her anyway for she was old.” But the hurricane was still very strong, and his wife and two children were holding on. One of the children was washed away and Narada became very distraught. But he was holding on with his wife. Then the other child was washed away. He became very upset. But he said to himself, “At least I have my wife. We can have more children.” Then his wife was washed away and he said, "What happened to my family?! They are all gone! Everything I worked for is all gone!

Everything I strived for is all gone! I am going to end it all, commit suicide!” So he let go of the rope. The next moment, he found himself sitting next to Buddha, with a glass of water. He looked at Buddha and Buddha said, "It’s about time you brought me my water!” So Narada looked at him and said, "Now I understand what maya is!”