WORST HEADACHE EVER
(or at least since 2002) 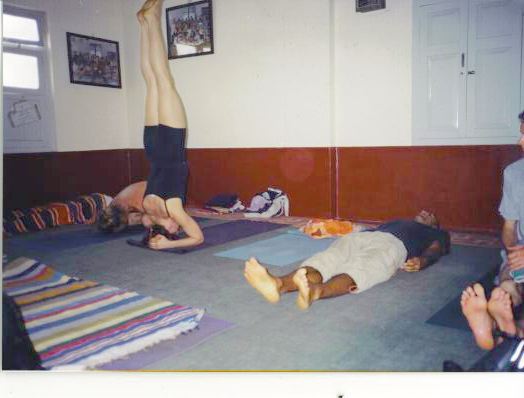 I've had a headache on and off for the past couple of weeks. Usually the neti pot and/or sitting will cure it. Backbends and headstand also help - which makes me think it's sinus-related.

But last night it would. not. go. away.

It got worse and worse.

It kept me up all night.

Each time I'd wake up, I'd do the neti pot. But the saltwater would not go through on one side.

Halfway through the night, The Headache of the Century was joined by The Terrible Nausea.

It was one of those awful nights where you question every decision you've ever made, and curse the cat for waking you up when you finally do fall asleep.

This morning, between finding subs and calling Group Exercise coordinators, I managed to crawl to the toilet for some Dry Heaves.

Subs were found (and the Group Ex bosses did not make me feel bad for being too ill to teach. Of course it's easier finding subs during a recession and when every third person you meet teaches yoga, than it was a few years ago).

Subs were found. Some sleep was had.

After several hours of up-and-down, I could even take some food. Watermelon, of course. It is the perfect sattvic food.

Now that I'm feeling almost human again, I'm remembering the last time I had such a terrible headache.

It was on my first trip to Mysore, in February of 2002. I'd only been there for a week, and The Headache came hot on the heels of a terrible stomach virus and an eye infection.

Details from the diary below.

The first week in Mysore, everyone wanted to know "Where are you from? How long are you staying?" (By the way, most of the American students are from the coasts or Colorado, and most of the males are named Michael. There are exactly two - Bob and I - from the Midwest). Now the questions are "Where does it hurt? Are you feeling any better?" Everyone has Pollution Cough, and the wait on the stairs is punctuated by sneezing fits. And then there are the sore knees and backs from yoga and the upset stomachs from eating and drinking.

Saturday is our *day of rest* -- there's no yoga and an entire day to fill. So of course THIS week I awakened to a massive, massive headache. I took an Advil and an Excedrin Migraine, had a bucket bath, and went down to breakfast at 3 Sisters. But nausea took over, and I lasted about 5 minutes before going back to my room. Bob brought me oatmeal (over an hour later; there were birds [women] in the restaurant, my dear). An hour after eating it, I was bending over the toiet, face-down. It was a long, sweaty, anxious session -- the kind one dreads.

As the day wore on the head continued to throb with more and more pain, and there was plenty of nausea. But this time a new friend named Jo (who is from Holland but lives in London) brought me toast and made sure I wasn't dead. That was nice.

By the time of my followup doctor's appointment from last week's infection rolled around at 7PM, the pain had lessened a bit and I was able to leave my room. The doctor said it was a migraine, gave me some meds for the next time it happens, and told me to see an eye doctor. The pain was focused around the right eye - the one with the infection -- and ran through the temple and all the way down my neck. She wants to be sure it isn't eyestrain (I've had eyestrain headaches in that eye since I was 10). The doctor also said it could have something to do with the cervical spine, and warned me to be careful in headstand (and that if it keeps up, I should get a neck x-ray). All I know is that I've had migraines in the US, that lasted all day, and which included nausea -- but none that actually caused me to lose my breakfast.

So another Saturday wasted. Although I did get a lot of sleep. Also, I figured out that I was born on a Sunday rather than an inauspicous Tuesday. So instead of being subject to the whims of Mangal-Var (Mars) and having "a tendency to suffer, be accident prone, to be robbed, attacked, put in prison, or have his good name ruined," I was born under the auspices of Ravi-Var, a sun god. Not exactly auspicious, but Sunday is "a good day to start a new endeavor." Now I must look elsewhere for the source of my problems. 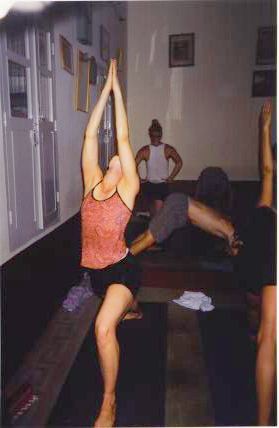