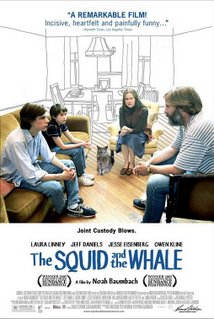 After breakfast at Dizzy's we walked through a bit of Prospect Park (lots of pine cones and acorns and fallen leaves and branches The Hex is dying to collect for the fireplace) before stopping by the Park Slope cinema to see which theatre is playing The Squid and the Whale -- pompous-but-proficient director Noah Baumbach's coming-of-age tale about growing up with dysfunctional writer parents in Park Slope. But it's playing in the basement, which means we'll be heading to Chelsea to see it with my brilliant painter friend Michael M (we worked together at Wishbone way-back-when), who just came back from Itay for a few months.

At some point tonight we'll meet up with the Goodmans (musical theatre folk and their three kids) in SoHo and get their take on the demise of Larry David and on the hellish Broadway pairing of Harvey Fierstein and Rosie O'Donnell in what The Hex is calling The Fiddler's a P**f ("Rosie O'Donnell as a Jewish woman???! Are you fakking kidding?"). Other fodder after the food will include Ben Brantley's NYT review of The Odd Couple, starring the unstoppable Matthew Broderick and Nathan Lane ("two actors perceived as being to Broadway what Redford and Newman once were to Hollywood -- chemistry-igniting buddies whose pairing automatically spells box office. The mere thought of the combination whispers sexy words you imagine embroidered on needlepoint pillows on the beds of Broadway producers everywhere: 'Familiarity Breeds Success'"):

"Odd is not the word for this couple. How occult an adjective suggesting strangeness or surprise apply to a production so calculatedly devoted to the known, the cozy, the conventional?" and so on.

The early onset of Ladies' Holiday has made the Patanjali Yoga Shala silence moot for the moment, but come Sunday I should be in an undefilable state and plan to drop by regardless. I'm trying to remember if that's the day the Hari Krishna-looking guy makes the fabulous Indian uppama breakfast (or if they're even still offering it). So out of the loop I am.

So far no Suketu Mehta* sightings (he lives here in P-Slope, as do many of Today's Best Writers). Not yet anyway.


*Another Suketu quote: "You can't throw a stone in Park Slope without hitting a(nother) writer."
Posted by Kali Om at 12:56 PM