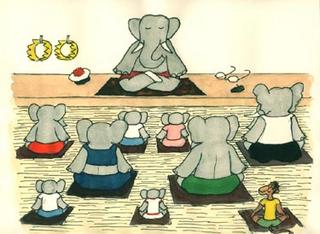 U KNOW YR A DE FACTO YOGA TEACHER WHEN...

Your bad-waitress bad dream turns into a bad-teacher bad dream.

Friday night, before subbing two morning classes for the director of the yoga center, I had the recurring nightmare in which I was at the shala and more and more people kept coming through the door and setting up their mats and ignoring me.* No one would sign in with me at the front desk -- a major problem when you're paid by the head -- so I put the sheet on a clipboard and asked them to pass it around and sign in, which most of them did illegibly or not at all. In the meantime the shala had grown several new rooms and people were setting up their mats here, there and everywhere. Many of the students were older and / or overweight which led me to believe they were on the wrong class.** Nonetheless I chose a spot that seemed to be the front of the sprawling classroom and tried to lead them through a warmup. I had to yell. It was awful. No one listened. Everyone was doing something different and, often, dangerous. Yet I somehow got everyone into samasthith (a variation of standing mountain pose) and started leading them through the opening chant. I was mid-mantra when I noticed Tim Miller*** in the front row. If that weren't enough, someone came in late and squeezed his mat into the spot next to him. It was David Swenson.**** The pair of senior ashtanga teachers looked at me expectantly (yet without judgment) as I nervously re-started the opening mantra. Their eyes were on me the whole time as I tried to teach. People did the wrong poses and walked in and out throughout class. It was impossible to keep order no matter how loudly I spoke.

After an eternity of this I woke up and went to teach the real thing -- where I knew most of the students, everyone listened attentively and only one person neglected to sign in.


*In a competing recurring nightmare, the students see that you're subbing and walk back out the door and you have no one to teach.

*** Tim Miller was the first American certified to teach ashtanga vinyasa yoga, which he's been doing for over 25 years in Encinitas, CA.

****David Swenson is another well-known ashtanga teacher. This is the first (and, one hopes, last) time celebrity ashtangis have made cameo appearances in this particular nightmare.
Posted by Kali Om at 10:00 AM