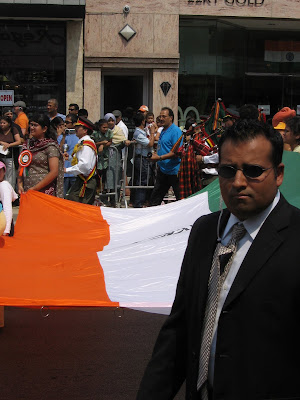 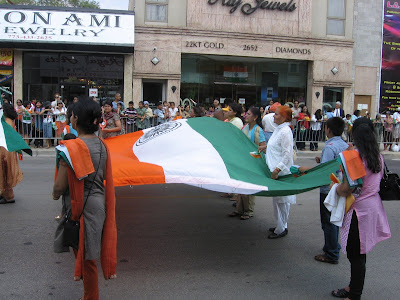 The parade actually made the throat tighten and the eyes tear up; how I miss India - the country that gave me a new lease on life. 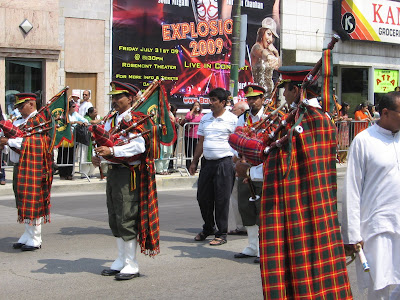 These gents brought back memories of the Indian military band that plays rousing marches and songs like "Auld Lang Syne" at the palace in Mysore. 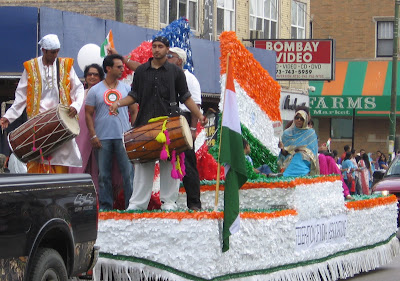 These two young (and very good) dhol drummers walked past a few minutes later, then reappeared on another float! 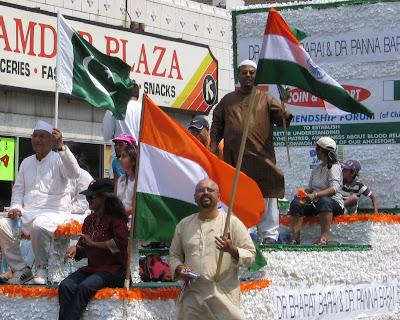 When one thinks of Independence, one can't help but recall the bloody Partition between India and Pakistan, which resulted in the forced movement of 20 million people and approximately 1.5 million deaths. I like this float, because they're waving the flags of both countries. They also waved the Stars and Stripes. 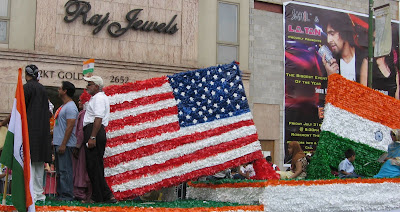 It's also rather interesting to see the American flag going "backwards" (the parade was traveling right to left). Oops! 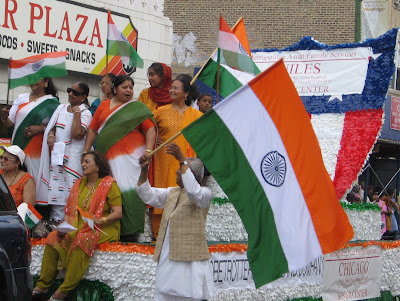 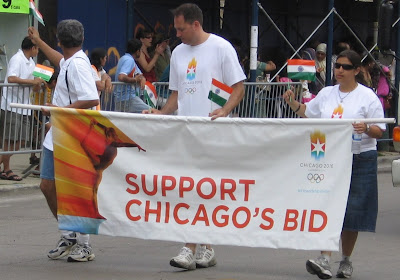 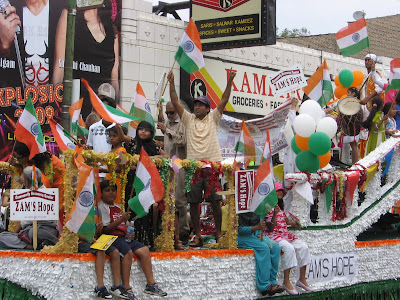 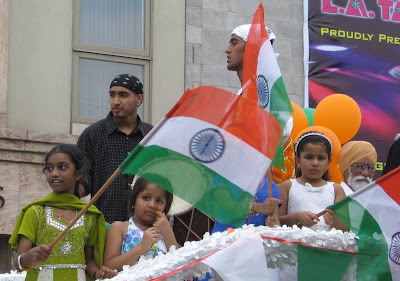 Notice the young dhol drummers behind the flags; they're ba-ack! 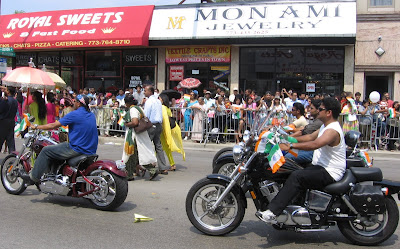 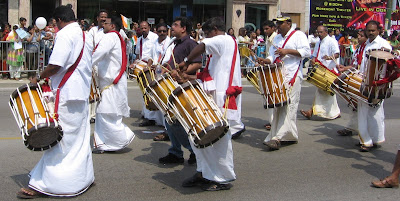 This group of dhoti'd drummers from Kerala most reminded me of India. There was nothing desi about them. 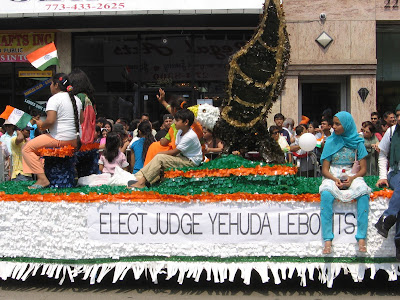 Many politicos were there... of all stripes. One of them even shook my hand (even though I have no idea who's running - or what for). Interestingly, the local alderman was greeted by a chorus of boos when he took the stage - and one cry of "Fix our pothole!" 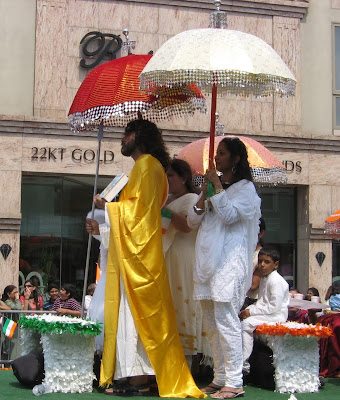 Jesus also made an appearance. Finally. 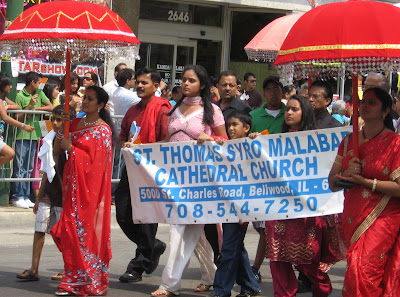 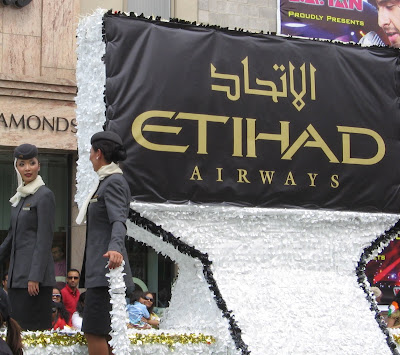 These air hostesses are living, breathing people - not dolls. One can only imagine how posh the Etihad Airways lounge at the Bombay airport must be. 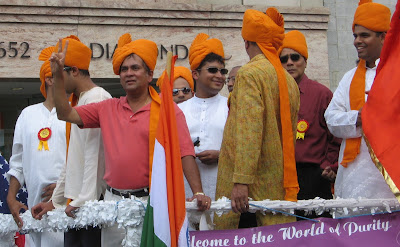 This pro-Maharashtra group brought to mind the scary Shiv Sena. 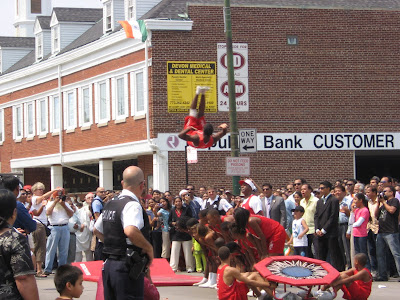 No Windy City parade would be complete without the gravity-defying Jesse White Tumblers. Secretary of State White is below the red-and-white "Do Not Feed Pigeons" sign. 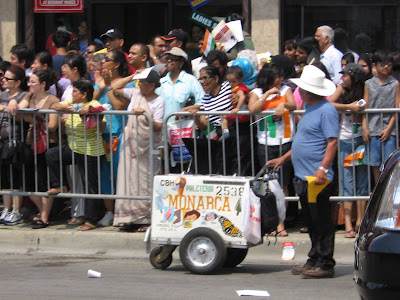 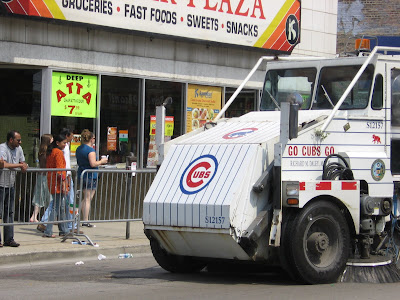 Seconds after the final police car had passed, this North Side "sweeper" was cleaning up. 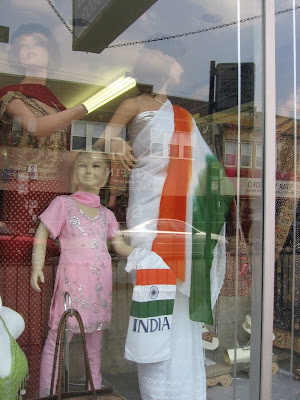 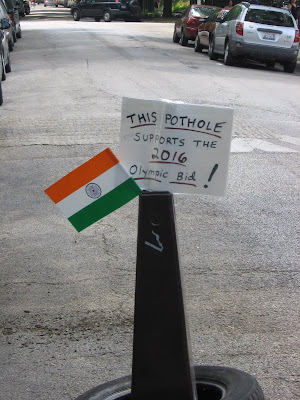 
MEANING OF THE INDIAN FLAG by Dr. S. Radhakrishnan, who became the first Vice President of India (borrowed from Big B's blog):


“Bhagwa or the saffron colour denotes renunciation or disinterestedness. Our leaders must be indifferent to material gains and dedicate themselves to their work. The white in the centre is light, the path of truth to guide our conduct. The green shows our relation to (the) soil, our relation to the plant life here, on which all other life depends. The “Ashoka Chakra” in the centre of the white is the wheel of the law of dharma. Truth or satya, dharma or virtue ought to be the controlling principle of those who work under this flag. Again, the wheel denotes motion. There is death in stagnation. There is life in movement. India should no more resist change, it must move and go forward. The wheel represents the dynamism of a peaceful change."
Posted by Kali Om at 5:41 PM